THE ESSENCE OF FORM, SOUND AND COLOUR

TO TRANSFORM AND INSPIRE THE BEHOLDER

David is the founder of Forging Mind and sole creator of all the videos and images you see on this site. David specializes in creating visual art for deep relaxation, meditation and mental well being.

Over the years David has collaborated with several musicians and sound artists that has given him insight on how to create visuals that help to reduce stress, encourage relaxation and altered states of consciousness. Crystal and Tibetan singing bowls, gongs, the handpan and ambient soundscapes resonate particularly well with David's creations.

David's visual art is popular with individuals who seek tools to help relax and disconnect from the daily noise. His digital products are also used in a wide range of professional applications including sound healing performances, yoga classes, meditation events and health and fitness studio owners looking for new ways to transform their client's well being.

David's journey of enlightenment and creativity blends digital technology with the visual arts. He had an interest in art at school although back then computers and creative software were in their infancy. He would paint still life subjects such as folded silk, fruit or a vase in gouache paints. David found it relaxing but didn't pursue art after he left school. Instead he entered the world of information technology and over the years built up many skills that he's been able to leverage for creating his digital art today.

In 2007, David moved from the UK to Australia where he lives today with his family near Brisbane, Queensland. Over the subsequent years David went through what could be called an awakening or enlightenment. He began to question many things he had previously accepted as the status quo. His mind opened to new ways of thinking and as he was coming to terms with his new sense of reality.

David's attention became drawn to patterns and geometry, and after crossing paths with a Canadian entrepreneur in 2016 he was introduced to a symbol that catapulted him into the visual arts world – the mandala. A symbol of unity and connectedness to self.

After months of research and exploration David's inspiration was drawn to the fields of Sacred Geometry, Fractals and Kaleidoscopes. He now incorporates these universal patterns of creation into his designs today.

David finds himself in a state of flow when creating his art. He becomes immersed in the creative process, losing all concept of the passage of time. He finds the very act of making relaxing digital animations a meditative experience in itself.

In 2017 David collaborated with Leith James, Sound Practitioner with the British Academy of Sound and founder of Brisbane based Gong Sound Meditation. Together they presented a visual art and sound experience using Leith's full 6 Gong setup and other transformative sound instruments. At the same time David's images and animations were projected onto a wall in front the audience. The end result was a tapestry of meditative visuals fused with the healing frequencies of gongs. 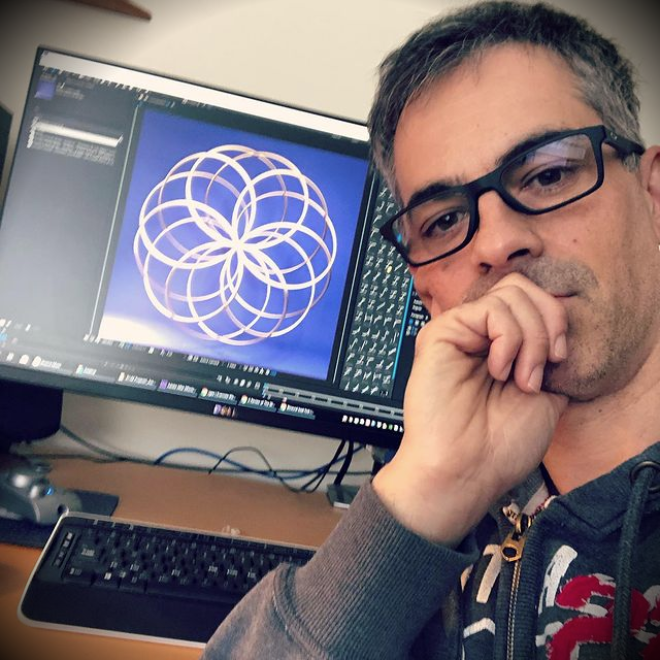 Today, David continues to explore the effects of mixing sound and visuals to create magical and healing experiences for everyone to enjoy.

Join him on Instagram (@forgingmind) where he regularly posts collaborations with sound artists.

For enquiries and commissions